Why I was gutted when Australia applauded the anthem change 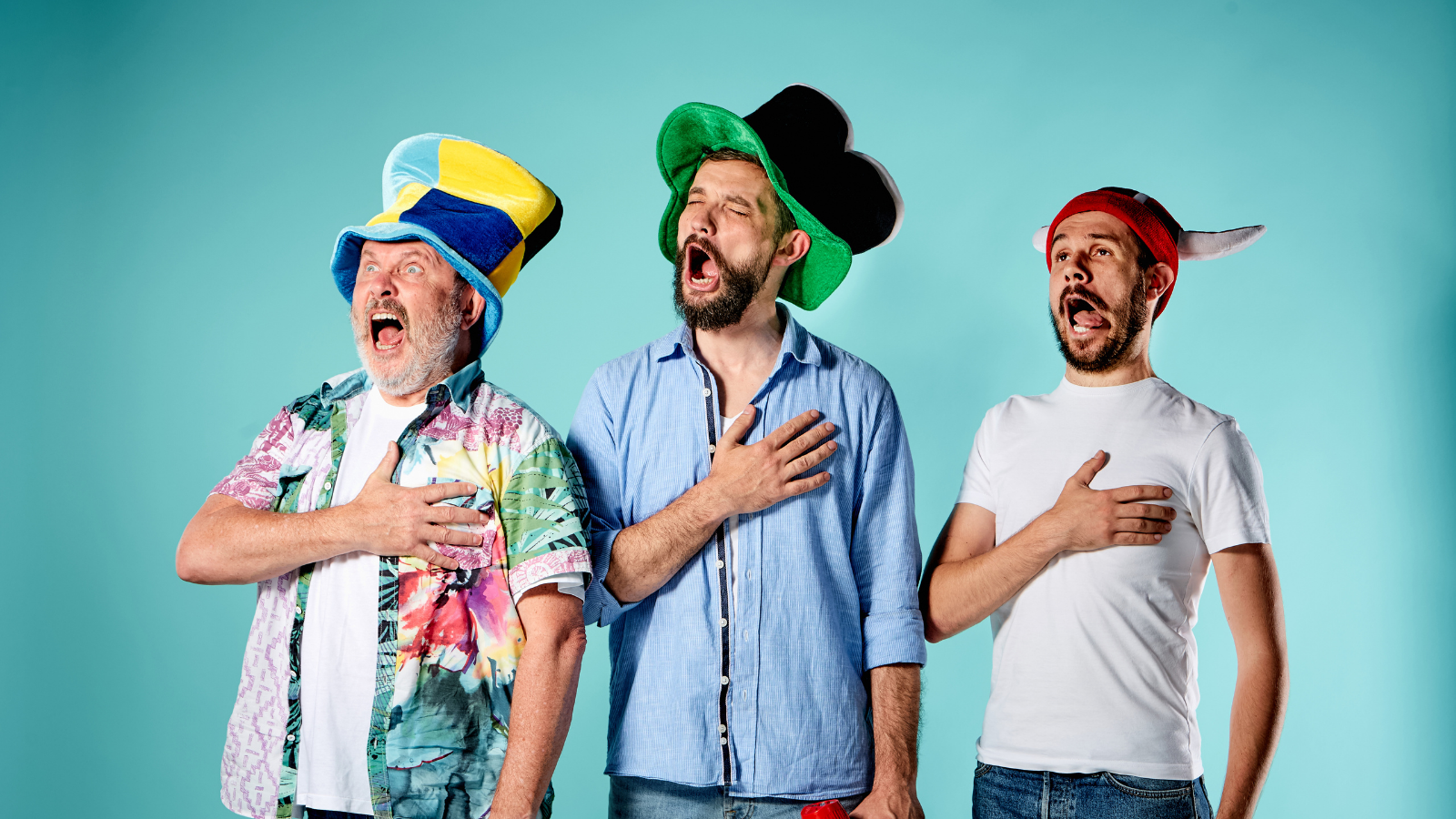 On New Years Eve, less than three weeks ago, our Prime Minister announced that he had solved racism by changing one word in our crappy anthem – he had changed ‘young’ to ‘one’.

Somehow this change, he claimed, recognised both Indigenous and migrant Australians and put to bed both the myth that Australia was a young country, but also any reason that Indigenous people (or anyone else) had to not sing the anthem at national sporting events.

His minister for Indigenous Australians, Ken Wyatt, wrote an article calling it ‘real reconciliation’ and claiming that the word ‘one’ magically

“demonstrates the hope of Australia, the Australian dream that opportunity is not defined by skin colour or post code but by grit, endeavour and a commitment to achieve. One signals our genuine commitment to ensure that no Australian is left behind.”

And while I laughed a derisive laugh and prepared to share my mirth with the rest of the nation who would surely see the sick joke that lay underneath this pointless and superficial change, instead, they applauded. It was a resounding success across the political divide.

The nation agreed, it was real reconciliation.

And I was simply dumbfounded… I shouldn’t have been, but I was.

Maybe it’s because my guard was down while I recovered on New Years Day, but either way it sucker punched me.

This is as close as I can pinpoint the moment that I felt the sting.

And then I remembered words that Celeste Liddle had written back in 2015, “You’d know if you listened.”

You would know… if you listened. When Celeste wrote those words years ago, it was in response to a survey IndigenousX had released, countering one by Recognise that claimed 87% of Indigenous people would vote yes in a referendum that had no question and which also had a lot of opposition from Indigenous people. Our survey showed almost the exact opposite. Our findings surprised a lot of people, even though the truth of our findings was already self-evident to anyone who was paying attention.

If you had been listening, then you already knew.

And here history was repeating itself, but for some reason this one stung much more than the Recognise survey had. Constitutional law is tricky, I told myself, and at the time Recognise enjoyed no-partisan support, aggressively enforced media support, and a budget that any Australian made feature length movie would envy.

But the anthem? That’s not complicated. It’s very simple and very crappy, and changing a crappy lyric in a crappy song when that is aggressively not the reason why mob were refusing to sing it at football games is obviously bullshit. Or so I thought.

In that moment the simple truth of Celeste’s words echoed back into my mind. It was not a new realisation but it felt soul crushingly profound all the same.

They’d know if they listened.

Australia chooses not to listen.

It chooses to ignore.

IndigenousX was built on the idea of amplifying Indigenous voices, but no amount of amplification will ever be enough to reach those who choose not to listen.

It’s like Jack Charles said on QandA, also in 2015, during one such appearance: 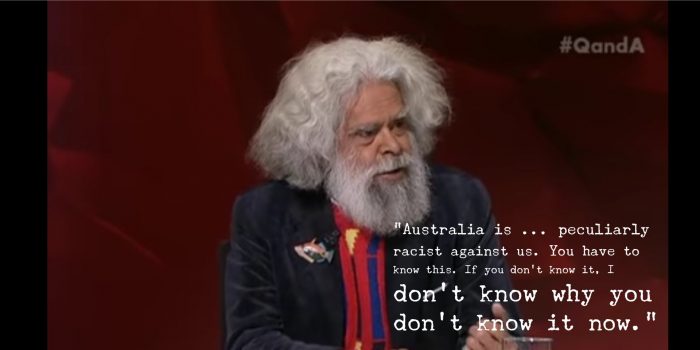 You’d know if you listened.

To live in Australia, to be a product of Australia, and to not know this, to not see this, can only be a wilful choice.

A person must either choose to see it and then wilfully lie about it, or they have to wilfully ignore it with a force of will so strong they could use it to bend spoons.

There is simply no other excuse for it after two hundred and forty-two years of forced occupation and cohabitation.

We want respect.
We want justice.
We want our rights as Indigenous peoples to be honoured and protected.
We say it every day, in a million different ways.
We write it, sing it, shout it, paint it, sculpt it, put it on shirts and on banners and then march down the street with them while chanting it.
It is available in every format to suit your preference.
You’d know if you listened.

And we will keep doing so. Every Invasion Day, and every day, because just as invasion has never stopped, so too will our voices never stop until they are heard, and not just heard, but respected and responded to.

But until people listen to us, and stop listening to the wilful and malicious racism that fuels the colony, we will still have to deal with this:

“Living on homelands is a lifestyle choice that Australia can’t afford!”

“European settlement was the best thing that ever happened to Aboriginal people!”

“A country can’t have a treaty with itself!”

“I can’t be racist, I have a friend who is Aboriginal!”

“Australia is not a racist country!”

“There was no invasion, there were no wars!”

“Before 1788 Australia was nothing but bush”

“Aboriginal people will claim your backyard if they get land rights!”

“Get over the past!”

“We already said sorry, what more do you want?”

“We said sorry, you should say thank you!”

“A Voice to Parliament would be a third chamber of government!”

“Why do Aboriginal people always make it ‘us and them’?”

“We are all Australian!”

“You should be thankful it wasn’t the Chinese who invaded!”

There is an almost infinite number of victim blaming, stereotypes, justifications, lies and misrepresentations that are so painfully false yet usually go unchallenged within the colony.

You could make 1000 Racist Bingo cards and still not even come close to touching the sides of racist ideas that justify and maintain Indigenous peoples exclusion.

But just as songs we carry were made for singing, so too is the truth we carry made for telling.

So do not feel too disheartened when they say they wish they knew the truth that you are trying to tell them.

Do not ever feel that that the problem is within your ability to speak the truth. It is with their ability to hear it.

And don’t ever stop trying to find new and better ways to speak the same truths we have always told. There is a joy in the search and in the discovery even if there is too rarely any joy in the measurable impacts of it. 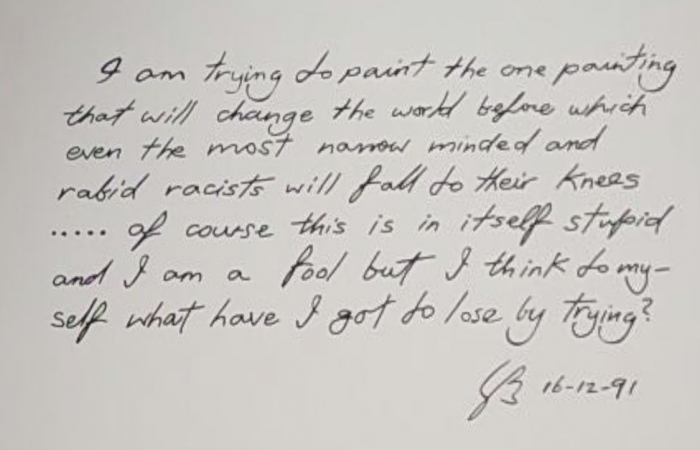 The problem is not you.

You are not the problem.

You carry the flame that has been burning in this country since time immemorial.

They’d know that if they looked.

They’d know if they listened.