Stolen Generations and their descendants have been telling us for many years about the extent of trauma caused by the forced removal of children from families. Today we publish statistical evidence of that lived experience and the pain our people have had to endure over a lifetime.

The Healing Foundation and the Australian Institute of Health and Welfare (AIHW) have today released a report that uncovers an alarming level of health issues, disability and social and economic disadvantage across Stolen Generations and their descendants.

This is important work for our families and communities, and for Australia more broadly. It’s the first time that we have had comprehensive data to illustrate the direct link between the forced removal of tens-of-thousands of children and real life experiences of Intergenerational Trauma.

It’s the first demographic needs analysis and policy impact study in this area. The report estimates that around 17,000 Stolen Generations members are living across Australia today and it shows they experience higher levels of adversity in relation to most of the 38 key health and welfare outcomes analysed. So it’s also a horror story.

For example, Stolen Generations are three times as likely to have been incarcerated in the last five years, almost twice as likely to rely on government payments, and 1.6 times as likely to be in poor health. This compares to other Aboriginal and Torres Strait Islander people in the same age group – who are already at a disadvantage. 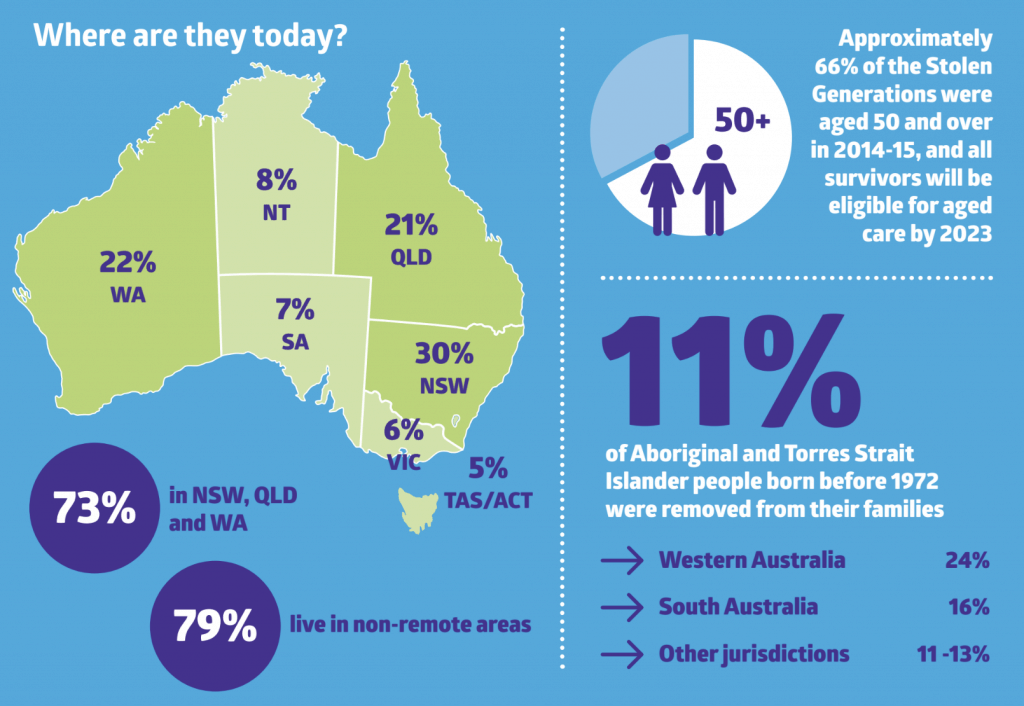 And we now know that about one third of today’s adult Aboriginal and Torres Strait Islander population are descendants of Stolen Generations members. Importantly, the report also shows that the descendants consistently experience poorer health and social outcomes. They are twice as likely to have experienced violence and 1.3 times as likely to report poor mental health, compared with other Aboriginal and Torres Strait Islander people.

The report states that two-thirds of the Stolen Generations were aged 50 and over in 2015 and that within five years they will all be eligible for aged care. This statistic alone should ring alarm bells. The data shows that Stolen Generations aged care needs are far more complex than the average ageing Australian.

For example, almost 40 per cent of Stolen Generations over 50 have poor mental health and close to a third (29%) live alone, while only a quarter own their home. Two-thirds (67%) live with a disability, and they are also more likely to experience health problems, including heart disease and stroke. The Stolen Generations must have appropriate support in their ageing years. And, given their past experiences, it’s vital that we find public funded alternatives to institutionalisation and create services to deal with trauma-related issues that emerge with ageing.

We know that Aboriginal and Torres Strait Islander children have been taken from their families since the start of colonisation in Australia. Children were kidnapped, taken for labour and removed from their families through government policies of the day.

We know those policies caused great trauma to our people. We know also that the trauma has been passed down to our children and our grandchildren’s children. The findings in the AIHW report show a clear ripple effect of Intergenerational Trauma. Let’s not forget that the reason for removal in all policy documents was to give people a better life. The data demonstrates the exact opposite.

We can see from this report that unresolved trauma is a huge drag on the work being done to close the gap. If our people don’t have an opportunity to heal from trauma, it will continue to impact on the way they think and behave. This can lead to a range of negative outcomes, including poor health, isolation, suicide and violence, which in turn leads to social and economic disadvantage. A gap within the gap of prosperity and wellbeing has now emerged.

Through a range of independent studies, the Healing Foundation has proven that healing works, from keeping kids in school and reducing incarceration and family violence to saving taxpayer dollars. It’s obvious there is a need to scale up healing responses across Australia, but particularly where we now know high populations of Stolen Generations and their descendants live. And we’ve only just been scratching the surface. We need government and service providers to commit to long term and widespread healing programs. Our research has also shown that poor accessibility is linked to a failure to provide services that are trauma-informed and culturally focused. We must involve Aboriginal people in designing services that work for our communities and when we train service providers so that they understand how trauma works, they are more likely to pick up warning signs early, diagnose problems correctly and find solutions that work.

We also see the importance of acknowledging the wrongs of the past with reparations. Almost three-quarters of the Stolen Generations live in NSW, QLD and WA – yet only one of those states has comprehensively addressed reparations for the Stolen Generations. We need a National Framework to create a comprehensive scheme that’s fair for everyone, in line with the national redress scheme being implemented in response to the Royal Commission into Institutional Responses to Child Sexual Abuse.

While we have known for years that unresolved trauma, experienced collectively, is the underlying cause for most social and health problems in our communities today, we have not yet had the evidence to back that up. Importantly, this report changes that.