When water is death

The day before yesterday I poured a glass of water from my tap in our town camp and gave it to my granddaughter – I did not know it then, but there was poison in that water.

Posted by Darrbarrwarra on Thursday, 19 April 2018

I am a Garrwa and Yanyuwa man born and raised in our Gulf country homelands in the Northern Territory.

The day before yesterday I poured a glass of water from my tap in our town camp and gave it to my granddaughter – I did not know it then, but there was poison in that water.

Today, I know our water is poisoned and I will not stop until it is clean again.

The NT Government Health Department just sent a letter, nothing else. They didn’t come to my door, just a letter saying something like, ‘there is lead contamination in the drinking water’. It’s dangerous for pregnant women, kids and everyone really. They told us to drink bottled water. We live in the bush, next to a huge river, the McArthur River. And we have to drink from bottled water, or a tank on a truck, it is very scary for our families. I am very angry and so are all of our Elders and leaders. Our women, children, family and unborn babies have been poisoned.

It is 2018 and we live in a developed, colonised place called Australia and we have no drinking water.

The Northern Territory Labour Government (yes you, Gunner) is accountable!

Power and Water is accountable!

Emergency Housing that was built in the 80’s has had pipes that have poisoned our people – we have been left to rot by these institutions of control and profit.

You are all part of this system of control and profit that has witnessed our people suffer since invasion!

Couple of years back at McArthur River Mine @GlencoreAus shot hundreds of cattle cos some tested positive for lead. They don;t want lead in the whitefella food chain but what about us, our fish, goannas, bustards, emu, wallaby. They just don’t care! pic.twitter.com/CW7QXU77PJ

How long has the Gunner Labour government and Health Department known about this poisoned water?!

How many times do we have to tell you, the McArthur River Mine has poisoned our community! In 2014 an Independent Inquiry told the Australian Government that the fish has dangerous levels of toxins in them and not to eat them. NT Government did nothing then, will you do nothing now, Gunner?

You will be held accountable for the poisoning of the water and our people.

But why does this Federal Government not listen to the people and why does it not care about life?

The NT government does not listen to the people and it does not care about life.

Roper Gulf Shire does not listen to the people and it does not care about life.

Mabunji does not listen to the people and it does not care about life.

Power and Water does not listen to the people and it does not care about life.

Mining does not listen to the people and it does not care about life.

Today I ask you to join us in the campaign to make these colonial institutions accountable – this is a Campaign for Water, for all people in Australia. Not just the city, not just rich people with jobs and housing, but for all people. We want a clean frack free NT!

Why is Water so Sacred?

Garrwa people have lived forever in our lands and just like our ancestors we continue to live with the land, hunting, fishing and maintaining our unbroken ceremonies and ancient laws.

We live our laws, unchanging, because our laws and practices renew and sustain life.

Government laws are about control and profit.

We know there are Two Laws and respect that. But we live through our laws, that protect the water, that protect our kids, that unite us with the land and the source of life.

Just like the other tribes of the Gulf region, Yanyuwa, Mara, Gudanji – our ancient laws and practices have ensured that lands, waters and atmosphere is living and sustained. When colonisers tried to come through in the 1700’s we mobilised and our leaders engaged in a 30 year guerrilla war. Back then our Garrwa leaders knew the importance of water, and its sacred nature. I think this is common for all of us blackfullas here on this continent and around the world. That is why law around sacred sites and water is so strong and powerful.

Today we all use the term #WaterIsLife, from the Tar Sands movement and Standing Rock in Turtle Island, to Mauna Kea and Aotearoa across Pasifika, to South America, and all over, we sing, chant, dance for all to know #WaterIsLife. Our relations together, we fight for water because we all care about maintaining conditions for life.

What do we do when Water Is Poison?

Our ancient laws are breached when Water is Poison.

We must as Darrbarrwarra as good warriors for the land make things right, create the balance again in nature, that is our role as Jungkayi, as Aboriginal people, as Indigenous peoples globally.

Posted by Darrbarrwarra on Monday, 16 April 2018

We are sick to death of reports, inquiry’s and royal commissions that the Government ignores!  Ignoring its own findings while the people suffer. 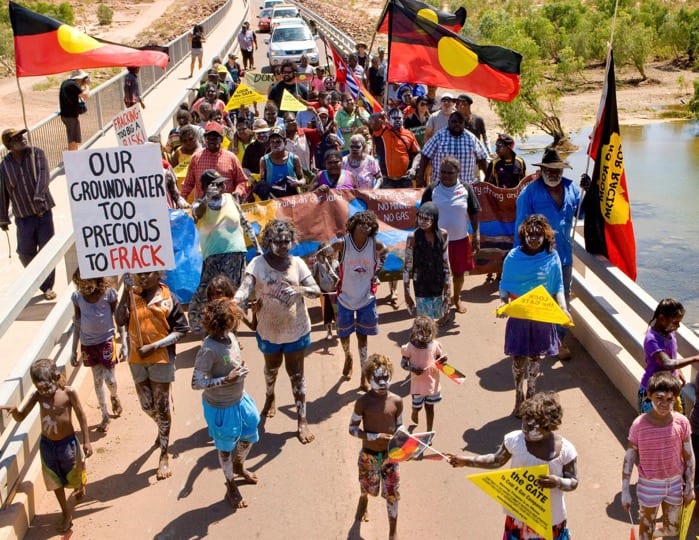 From Don Dale to Fracking to The NT Intervention this is an apartheid territory under the banner of a so called democracy.

We are working for rations in 2018 – CDP makes us work a proper job for the benefit – but who is benefitting here?!

And where are our elected leaders – you are meant to be fighting for us? Not waiting for another crisis to happen!

The only politician to come to us is our own family, Malarndirri McCarthy my daughter, we are so thankful for you coming home, like us she was so shocked and is now fighting for our right to water, our right to housing, and is part of our Campaign for Water. We must unite and stay strong, my countrymen, like a family, all of us in the Territory.

We know we have a basic right to water like all Australian citizens.

We demand access to clean water. We demand jobs to clean up this mess mines made.

This is our right on our lands, in town camps, on country in our outstations which also gets water from the bore which has poisoned our people, my family, our kids.

The United Nations Declaration of Indigenous Peoples Rights states that all Indigenous peoples have the right to self-determination and autonomy, to clean water, to healthy lives.

When water is poison we rise.

When water is poison we unite.

When water is poison we fight or die.

We demand answers into how this neglect has happened for some many decades!

One day I know I will be able to offer water to my grandkids knowing our rivers are clean and full of life, this is our vision.

Follow our online community on facebook as we grow stronger and build homeland autonomy and healthy thriving communities.

and connect with our environmental movements Garrwa and Yanyuwa man born and raised in our Gulf country homelands in the Northern Territory.